June 29, 2010
“What is missing from our dwellings today are the potential transactions between body, imagination, and environment”; … “To at least some extent every place can be remembered, partly because it is unique, but partly because it has affected our bodies and generated enough associations to hold it in our personal worlds.”
Juhani Pallasmaa in The eyes of the skin quoting Kent C Bloomer & Charles W Moore in Body, Memory, and Architecture

Considering this, how do we affectively and bodily experience the city when it is going through regeneration?
In the present work, I will more specifically look at a site bought by Tesco in West Bromwich city centre, where no construction has happened yet but where most of the buildings have been emptied. It is as difficult to apprehend the surface of this site, as it is to apprehend the amounts of money involved in the largest British retailer. Only a physical confrontation with the space and some imaginary illustrations can help drawing the sketch of a personal understanding.
Through a documented performance I will attempt to measure the perimeter of the site using a map and a string. The project will be accompanied by collected digital images, drawings and texts, which will come as a fantasmatic counterpart. 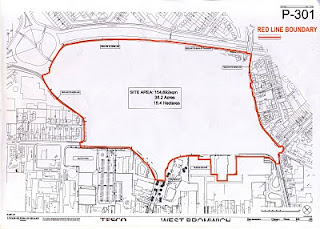