“What do you love ?” - Common Ground Commission Proposal

Hanley Park is, on a multicultural point of view, one of the richest places in Stoke-on-Trent. Certainly much more than a dozen of different languages can be heard there. The Shelton area has a highly diverse community: Asian resident community, International students, European and East European migrants, asylum seekers from various countries and now families who have become residents in UK. Opposite the park is also the Cauldon College where a lot of foreigners go to improve their English when they first arrive in Stoke-on-Trent. This is where the idea and the first trials of one of my works started, in 2002, when I first arrived in UK, coming from France.
This piece is an interactive and progressive installation called “What do you love ?”. It consists in a circular portable mobile : from the outside, on hanging pieces of papers, people can read what answers have been given to the questions* and from the inside, they can individually write their own answers.
For Common Ground, I would like to invite the park users to take part in this piece in their own language but I also would like to start the 2nd stage of the project, which is the translation of each single text into as many languages as possible, turning each single paper into a booklet. Some of the translation could be done in collaboration with translators from the Stoke-on-Trent College (about 8 different languages).
There are two sites I am considering because of their circular shape : the bandstand or the “little feature originally from the Garden Festival 1986” (in Anna’s blog). In the bandstand, the mobile could be hung in its middle and tables and chairs arranged around it for people to do translations. The other site could be used as itself to hang the pieces of paper, covering the entrances.
There are many interesting sides to this work : the recognition of people’s different cultures, the sharing of an emotional content which is discovered as universal (for many people, the most important person is their mum), the necessity of one common language to communicate (here, it is English) … 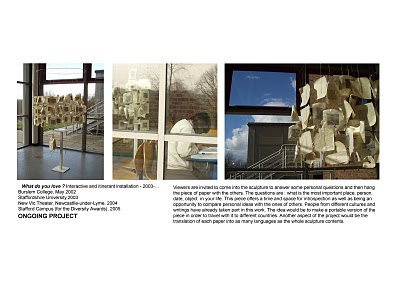 work as presented in Stafford 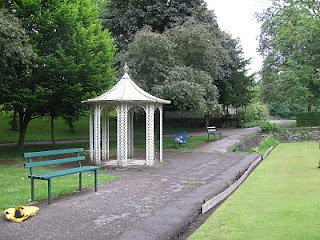 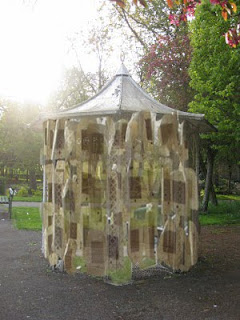